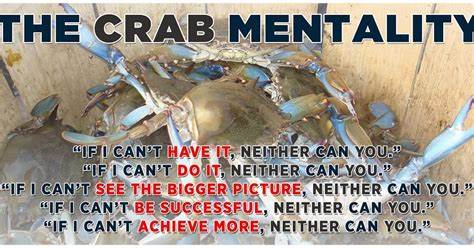 Crabs in a Barrel

A Black person can hate or be jealous of another Black person over something like a promotion, or a Facebook/Twitter page, or how they successfully interact with the majority group --- in other words: “Black jealousy” inflicts danger for successful Blacks, especially “newcomers” in competition.  The syndrome is:
"If I can't have it - You can't have It”

My expertise in the area of the crab syndrome began as I sat listening at the feet of my great grandparents, grandparents, parents, eight siblings, and a host of extended family.  I heard them discuss "crabs in a barrel syndrome", and how one Black would sabotage and discourage another Black when they see someone straddling the barrel ready to escape, the other crabs will reach up and pull someone back down into the barrel.  This leads to Blacks constantly being in competition with one another more often than competing with the White successful person.

Some Blacks would prefer to pull another down than to help push another out of the barrel, jeopardizing the success potential of that person, and at the same time not understanding  they are endangering their own success, opportunities, social growth, or financial growth – not even to help the success of even a friend --- "if I can't have it - they can't have it”.

Important to know, those who get out of the barrel often won't reach back and try and help someone else get out.

My expertise in this phenomenon has continued as a Black and a woman throughout my life's very diverse evolution.  For instance, the Producers of the Bill Cosby Show "You Bet Your Life", had me as a guest on the show because they were intrigued by the fact that I had been the "first Black" thirteen times, in either business, jobs, groups or organizations.  I’m writing much of this blog based on the book I wrote for the numerous classes, seminars and trainings I do, entitled "The Only Minority in the Workplace, Group or Organizations", to be re-published for the public, (one of four books) registered with the Writers Guild of America https://www.wga.org    A'Dorn Studios http://www.ADORNSTUDIOS.ORG/

While I see this as a more “social mentality” than it is a deep-seeded racial or prejudicial issue that we need the country at large to address, but it is a cultural self-growth internal development issue. It is my belief that the origins of this syndrome continued evolving from the slave days of the Willie Lynch speech making era; pitting one Black against another, or one group or type against their counter-persons.  That, coupled with the “House N…..”, who would sell out the “Field N....." because they felt superior because the owner chose them to work in the house.  As a result of these indoctrinations, Blacks still see each other stereotypically the same as the media portrays us today; as all living in "the hood", inferior, and dumb.  Nothing can be further from the truth.
Playing the Crab forward to recent eras - the "quotas" and "the first Black" evolutionary actions continued to damage the internal Black cultural relationships of pitting one against the other, establishing what amounts to a new "House N....." in a more modern subtle manner.  The quota was established on the pretext there were "no qualified Blacks", therefore the "firsts" were necessary, and we honor them today, but Blacks now need to identify with the causal effects these era identifications has had - and just know that the crabs still in the barrel - and the crabs that got out are equal!
Most Blacks historically grew up living with limited exposure to other ethnicities, so when they get out of the barrel, they hold on to the belief that they are the "only ones" out of the barrel.  Thusly, they will join the Whites in berating and competing with other Blacks.  Or they will self-servingly nudge the Whites and/or others on in what amounts to harassment and sabotage of the "new one".  If you noticed, when Obama became President, even notable Black figures had more negatively to say in public or behind the scenes when the “mic” was “still” on. There are judges on the bench who will rule against Blacks more harshly than they will others.
In my book I talk about the "new" Black, or a new person that doesn't look like the members of the group in charge - they stand out.  I delve into the (6) six categories that a new-comer will absolutely be placed in by the originals.  The new-comer cannot just be themselves; they will be designated and placed into one of the six categories.  When they are designated to the category that the majority group can accept.  The Black person wil “join in” with the originals in order to keep their place in the group, not realizing that they too had been placed in one of those categories when they first joined the group and continue to be in that designated category for all the time they are there.  More likely than not, Blacks were placed in one or the other of two categories: "The Uncle Tom", or "The Buffoon".
There is only one of the six categories that I will accept because they will not allow me to be Wanda Dorn.  We need to study the categories to know who you're going to become.  I WILL NOT ACCEPT being designated in either of the other five. It would take another blog to describe the one I chose and why.

I stress in my book and classes the fact that Blacks, women, zaftig people, and  other minorities, will without exception nor consent, be placed in one of the six categories.  That category is usually directly in correlation with their ethnicity.

I have found in other ethnic groups, cultures, and even in the workplace we often suffer the same syndrome because Blacks and other groups more often do not support each other.

How do you avoid these "crab hands" 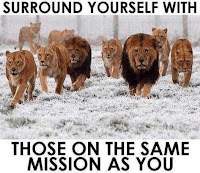 Posted by Wanda Dorn at 4:30 PM No comments: